"Your personal invitation to our Intimate Inner Circle"

and we want you to be a part of it! 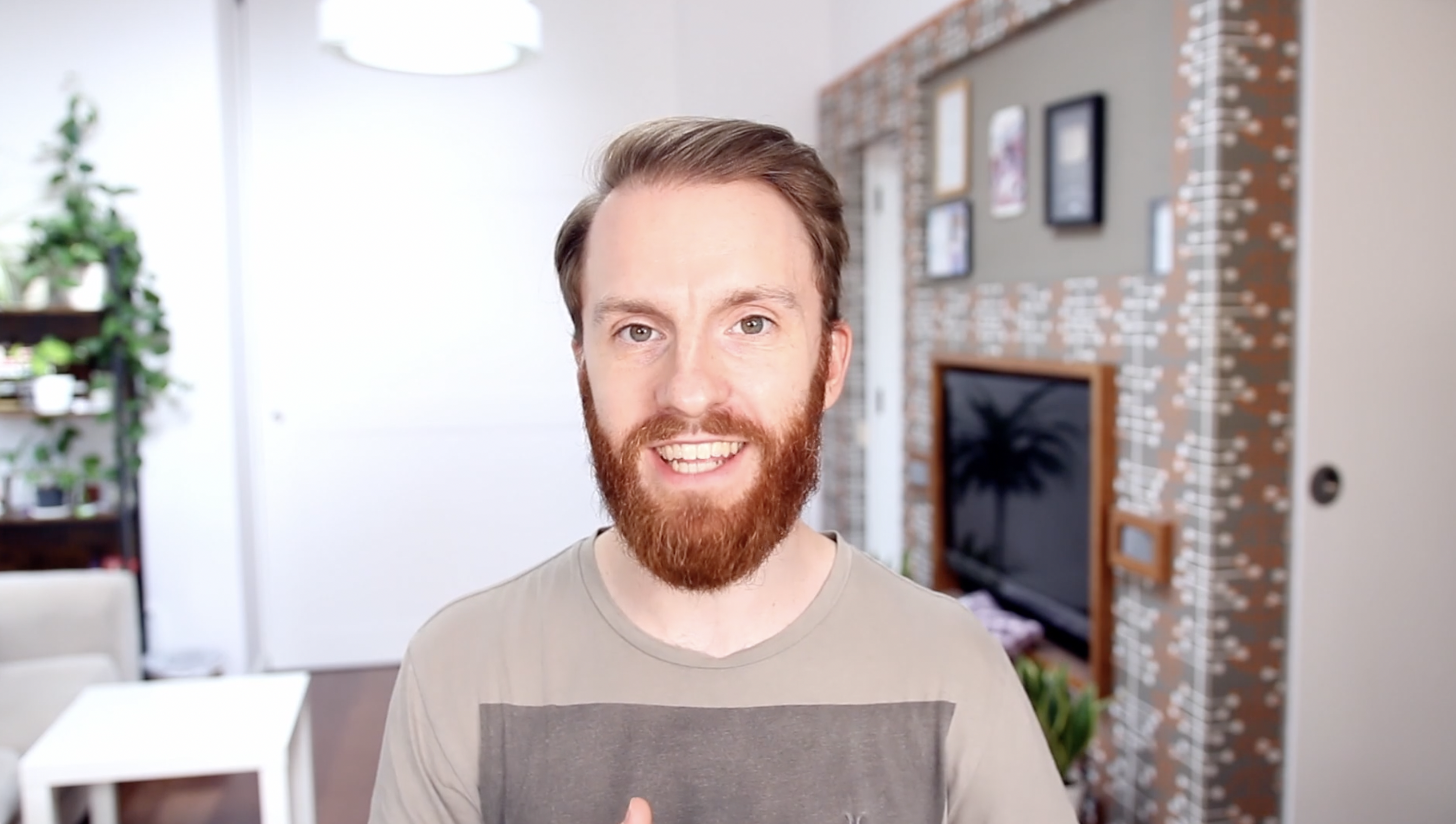 About 3 months ago three people jumped on a call with a crazy idea...

The idea was this - what if we came together, combined forces, and created the GREATEST magic membership ever?

Now after WEEKS of painstaking work: we think that we've done just that!

But we would say that of course...

So let's make an agreement.

If after reading this sales letter, you think we're right, please join up because we want you as part of our membership.

First, we'll start with the name:

Now when we say ‘Magic Mastery’ please don’t get us confused!

When you think of mastery within magic probably a few things come to mind - knowing a bunch of sleights, having perfect mastery of all areas of magic including coin, rope, stage, etc.

To us - this is NOT magic mastery.

Magic mastery is a mindset, a way of thinking.

We truly believe that when you approach anything, you should give it your all, and attempt to become the best at it that you possibly can.

That does NOT mean practicing 8 hours a day every day.

Fair enough if that’s what makes you happy, but that’s not what we expect from our members.

We wanted INSTEAD to provide a place where you can get the best content and best teaching wherever you are on your magic journey.

Now there is one problem with everything we’ve just said - we don’t want to sound too inclusive.

What do we mean by that?

Well, this membership isn’t for everyone.

This membership is for people who want to give their best to magic, who care about the craft, and who are willing to be in it for the long run!

We want people who think like us and here's why...

The content we’re giving you here is cutting edge.

So much of our energy goes to making this one of the most innovative communities in magic.

We don’t take that lightly, and we don’t want to give it out freely to people that simply misuse the membership.

You may have seen some magic sites market themselves as a 'streaming service'.

There's nothing wrong with that AT ALL, but we just want you to know - this isn't that!

(but if that’s what you want, feel free to sign up for them!)

Here, we know our members by name. We call many of you friends. We don’t WANT to be a streaming service.

We want to carve out a corner of the magic space that's completely safe and in line with how we believe magic should be - and we want you to be a part of it!

That being said, here are the three pillars that make up Magic Mastery...

(if any of them sound appealing to you, you can know for sure you're the right fit for this membership!) 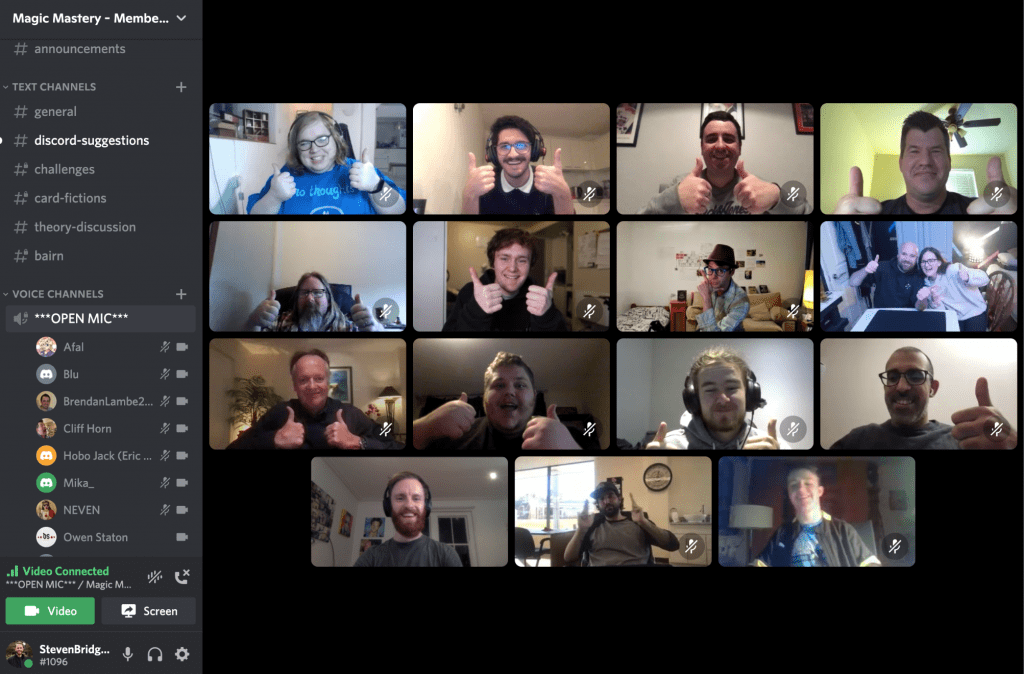 (A screenshot from a weekly meeting)

These are the words of Steven Bridges, who manages the community:

I started performing magic when I was 10 years old.

And I think like everyone that starts magic, I was very passionate, and also had a lot of questions. So I’d go on magic forums and ask for advice.

And I was really taken aback by just how unpleasant people could be.

I’d be patronized for asking stupid questions, there’d be a lot of arrogance or dismissal of my ideas.

Which is totally not what you need when you’re starting out. The whole thing genuinely put me off being friends with magicians for a while.

But after performing magic for 20 years, I set out to change that.

And I managed to create a magic community of supportive magicians, that actually try and help each other improve.

There are no egos or status games, just nice people, all sharing their passion for magic.

2 weekly meetings that will happen WITHOUT fail (featuring anything from a casual jam to a lecture from Steven Bridge’s on gimmicked stage magic.)

A secret Facebook page where you can make friends with like-minded magicians, share your discoveries, and get personal tutorship from some of the greatest magicians alive.

In terms of methods - you're in for a treat!

Wherever you are in your magic journey we have a place for you!

We won’t just throw effects at you, but help you on your path.

From Steven Bridges (card, mentalism and coin routines that have been tried and tested on the streets, casinos and more!)

- The Victory Shuffle - Steven's best-selling release of all time. A false overhand shuffle that looks just like the real thing.

- Skip Track (a routine he kept hidden FOR YEARS, that magicians all over the world have started using as their killer opener!)

From The Daily Magician (focused on mem deck - the greatest tool in card magic!)

- ‘The Babylon Secret’ (2-hour and 51-minute video course that will open a whole new world of magic, and make every effect you currently perform…instantly stronger!)

- A growing library of ORIGINAL memorized deck effects (such as a master class on A.C.A.A.N. and a course on weighing the cards!)

- Besides the memorized deck, a huge range of contributions from magicians such as Andrew Frost, Christian Grace, Ollie Mealing, and more…

From Danny Goldsmith (everything you could need to pick up coin magic, or continue your advancement!)

- An exclusive beginner's coin magic course (which he described as the SINGLE BEST WAY for any magician to start coin magic!)

- Countless original moves and sleights such as the ‘M&M change’ a fun visual change that you can do with M&M’s, coins, and rings!

* We know and 'MUCH MORE' is super overused in sales copy, but for real, there are around 100 total effects, routines, and sleights we left out of the bullets because it would take up WAY too much space.

You'll just have to see for yourself on the inside!

As part of Magic Mastery and our most private inner circle, we want to invite you to join in our deepest thoughts and exploration!

Every Friday, we send you a ‘Thinking Differently Essay’ as part of your weekly email.

The ‘Thinking Differently Essay’ will highlight a dazzling insight we picked up during our studies during the week.

It might be something we learned from $2000-a-ticket value marketing seminars, something we picked up from the autobiography of a world leader, or perhaps even something one of our own ‘in-house’ Inner Circle members sent in!

Either way, we want to give you a new philosophy for approaching magic (and life) that could potentially 10x your magic skills and understanding.

And for reference, along with the essay each weekly email you receive as a member will also more or less feature:

- 1 Effect, Sleight, Course, or Routine (from Steven, The Daily Magician, Danny, or one of our friends such as Ollie Mealing)

- 1 ‘Thinking Differently essay’ (an essay where we take a lesson from outside of magic and explain how it can apply and improve your skillsets in life and performance!)

- Community Updates (learn how your fellow members are doing, and join in their discussion!)

- 1 ‘Deal of the Week’ (claim your discounts on desperately sought-after magic!)

As you can see there’s a lot on offer.

And you’re probably thinking - with a new contributor to Magic Mastery - you’re going to put the price up right!?

Just for reference, this price includes:

We could have made this upwards of $50 like many other memberships have done.

(that’s much less than a good cup of coffee…)

Plus, as with everything we do, if after 30 days you haven’t enjoyed your experience, simply drop us a line and we’ll refund you your money!

But we highly doubt that will be the case…

What members are saying...

"This is a gust of fresh air in the ... magic world ... If you have even a passing interest in taking your ... work to a new level, do yourself a big favor and join as soon as possible!"

"The amount, but also the quality of advice I get on how to improve my magic from Steven, but also from other members, is worth the monthly subscription alone, not to mention mind-blowing effects and sleights taught on the platform."

However, if you are serious about your magic and want to learn how to make that “trick” truly magical, I highly recommend Magic Mastery.

The content provided is fun, clearly explained, and demonstrated."